When you think of the film industry, you instantly picture glitz and glamour. Champagne on free flow, beautiful people in elegant dresses and tuxedoes. Fran Hill works in this industry but her version of it reveals a very different side.

Fran Hill has been working in the film industry for 3 years now. At 22 she started her career as a runner after graduating from university, fetching coffee and food and running general errands for the higher-ups. She studied a Media Production Degree at the University of Lincoln but assured, “that wasn’t really a big factor in me getting my job.”

Hill smiles as she talks about her job, when she describes her role to people they automatically think of CGI (computer generated images). “Everything you think you probably know about visual effects, is not what I do.”

Hill works in the 2D department, in Rotoscoping at Framestore. “I often describe what I do as five year old stuff. Basically I cut around things and I colour things in and eventually, one day, they might let me use a glue stick to paste everything together.”

CGI provides all of the exciting stuff like explosions, crashes and more. 2D rotoscoping is this too but also everything in the background, so this could be recolouring trees or even putting in a whole new sky. It is supposed to look unambiguous, like it was always supposed to be there.

Most roto artists work to 24 to 30 frames per second, so these add up fast. An example of a roto-heavy production in action is the A-Ha music video ‘Take on me’. It contained 3,000 frames and took 16 weeks to complete.

Many view roto as an entry level job, but without it nothing would look smooth and realistic. Every production requires some level of rotoscoping no matter how basic this may be.

Without visual effects the majority of today’s films, advertisements and music videos would look very different. However, many visual effect artists often go underpaid for their work or even without payment.

Hill explains: “It’s really cutthroat at the moment. A couple of years ago, Life of Pi won the Oscar for visual effects. What wasn’t widely publicised was the fact that there were a lot of visual effect artists protesting outside the Oscars because a lot of people went unpaid for a lot of the work they did. That’s because the film studios aren’t prepared to pay that much for the work, despite the fact that it wins Oscars and that is a problem throughout the whole industry.”

Another difficulty Hill faces regularly, as well as her colleagues, are the number of hours they work. She experiences 17 or 18 hour days, especially close to deadlines. This is common theme throughout, not just within the lower levels but in higher ranking positions also.

“I’ve seen teams, from the most senior 2D guy in the company all the way down to the most junior member, having to work 18 hour days, coming home at four in the morning, getting back up, going back in at ten in the morning, so that they can get stuff done.” 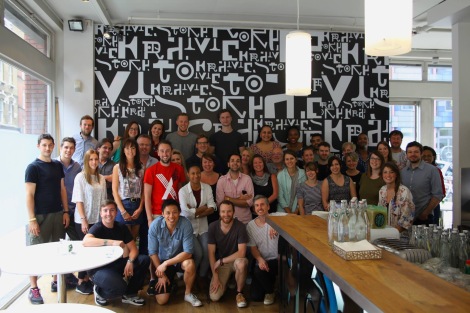 So why do it for little pay and long hours? Well it can be very rewarding. Sitting in her grey, star patterned jumper she reflects on one of her favourite memories from her work. Based in the Informercials department she rarely works on films but she was a part of the team that worked on Richard Ayoade’s film, The Double. “We did a casting crew screening in our cinema so I got to invite my parents. Having my name come up in the credits at the end when I was sat next to my parents, that was really rewarding. I really enjoyed that.”

After two years working in the Rotoscoping department, Hill hopes to soon move up to become a Junior Compositor where: “one day they might let me use a glue stick to paste everything together.”

launches a project every month